The Inflatable Bladder system works as follows: A flexible rubber bladder is connected to a winching system which positions the bladder over the defect to be repaired. The bladder is also connected to supply lines, normally from surface but sometimes from onboard storage, that provide the resin feed for injection into the defect to seal it. Once in position the bladder is inflated. Normally only the end sections of the bladder inflate with the central section covering the defect. Once solid against the pipe inner wall the resin is injected into the space between the two inflated ends under pressure. Resin mixing, with resin normally being two part mixtures in nature, is normally achieved using static mixers in the delivery tubes. The pressure of the resin forces it into any defects at the treatment site as well as forming a thin resin ‘skin’ aroun the inner wall of the host pipe. The resin is allowed to cure according to manufacturers specifications and the bladder is deflated and removed. The resin remains in place sealing the defects. There are several systems available to the market each should be judged on its merits in relation to the job in hand. 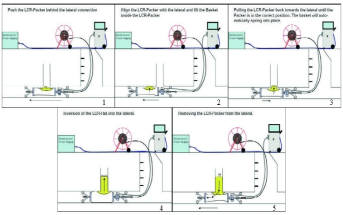 In an extension to the basic defect sealing capability of this type of system, developments have been made whereby subsequent to the lining of a mainline pipe and reopening of the lateral connections, this joint position can itself be sealed against infiltration. The systems available are known by a variety of names such as Lateral Joint Seals, Saddle Seals and Top Hats amongst others. Sealing of the lateral is achieved from within the mainline pipe using specially adapted inflatable bladder which is designed to not only push a resin impregnated seal against the inside of the main pipe lining but also to extend the liner material into the lateral for some length. When viewed the cross-section of the seal looks like an inverted ‘T’, with the top cross bar forming the seal inside the mainline pipe and the trunk of the ‘T’ extending into the lateral. The lateral seal can be designed to meet any angle at which the lateral connection enters the main.

Robotic systems tend to be more complex and given the hardware involved possibly more expensive to set up. The systems can either be a single multi-purpose robot that completes all tasks in the repair or a two robot system with one being for preparation work and one for installing the sealing compound. Whichever format is used the systems work generally as follows: Once the defect is located the site is prepared by the robot by way of cleaning and grinding the defect into a manageable ‘target’. Once this is completed the robot is then used to apply the sealing resin to the defect from a feeder tube. Mixing is achieved in a similar way to most bladder system and feed can again be from onboard or surface supplies. Once filled the defect is smoothed over with paddles attached to the robot to give a clean finish. The robotic operation is constantly monitored using CCTV cameras.

Flooding techniques are normally carried out between manholes on pipelines (normally gravity pipes) where there are a number of defects, failed lateral connections or cracks but where the general structure of the pipeline is sound.

The technique normally utilises a two-part chemical treatment. Once cleaned and prepared the pipeline is isolated from the rest of its network and the first chemical is pumped into the pipeline. The chemical fills or passes through any defects into the surrounding ground. The level of the chemical in the pipeline is kept constant by feeding at the upstream manhole to maintain a positive pressure across the pipe wall. When sufficient time has passed and it is deemed enough chemical has passed in to the surrounding ground, chemical 1 is quickly removed and replaced with chemical 2. The reaction between the chemicals caused a resin type seal to be made in the defects and wherever the two chemicals mix. Outside the pipe this causes a concrete-like structure to be formed as the chemicals mix with the surrounding ground. The level of the second chemical is monitored and when its level stops falling in the system it can be taken that all defects are sealed and no further reaction will take place. Chemical 2 is then removed from the pipe and the network is reopened.

Until recently Localised seals simply meant the used of a relatively small, normally rubber-type band being place over a defect with its position being maintained using a metal spring clip that applies circumferential pressure against the pipe’s inner wall. In some instances resin packs replace the rubber seal such that once held tightly against the pipe wall it forms a bond with the pipe as an added support. Positioning and spring clip expansion are normally achieved using a robot system in association with CCTV observation.

An advance on this technique has been developed however where the spring clip is not used only as the seal with elastomeric end seals. There is also a system available which utilises the spring clip as a carrier for a grout impregnated sleeve which not only seals across the ends of a defect but also impregnates the defect itself with a sealing grout. The installation process requires an absorbent gasket to be place around the outside of the spring clip. At the appropriate time, this gasket is impregnated with special water activated sealing resin (two forms are normally used depending on which installation process is used). The whole arrangement is winched into place over the defect and the spring clip expanded into place. As the clip opens the sealing grout creates a foam which acts as a seal which is forced into the defect as well as over the whole of the contact area between the clip and the host pipe. The foam does not fully set over tome so has the flexibility to maintain the seal even though some pipe movement or ground movement might occur.

A more recent development has been one based on the biology of the human vascular/blood system. A company has developed Platelet Technology ™ which uses specially designed Platelets® to seal leaks. The Platelets can be made to suit most operational requirements and can be manufactured with Radio Identifiers or Radioactive markers for precise location once in place. The Platelets are introduced to the flow within the pipe (normally used on pressure pipelines) and move with the flow until the point of the leak is reached. Some of the Platelets move into the defect as the flow tries to escape through it and become entrained in it. As the layer of Platelets builds this causes the defect to quickly become sealed. The leak stops and excess Platelets can be recovered downstream. The location identifiers then help isolate the leak position eliminating the need to trial hole to establish the position. The Platelets are also designed to give between 6 and 12 months nominal life enabling engineers to establish the best permanent solution to the leak problem, as opposed to the quickest ‘best fit’ solution at the time the leak is discovered.